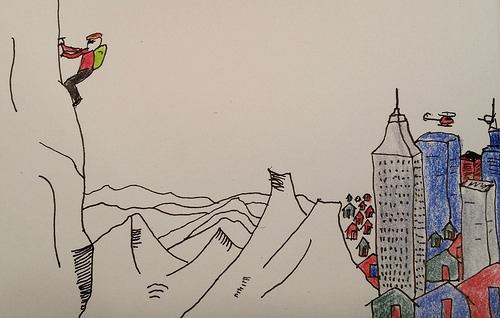 Death from a climbing or skiing accident is hard to swallow. Suicide, by anyone, let alone a climber or skier, is more difficult because, well, it wasn’t an accident.

Which made Kelley McMillan’s piece in National Geographic’s Adventure Blog, “Why Are Ski Towns Seeing More Suicides?“, alarming. The piece is focused on the ski towns, yet the data presented didn’t demonstrate that it was unusually higher in those communities than others, but I agree that the suicides were higher profile anecdotally. And it had an extra dose of being unsettling: How could people in paradise, living the dream, want to end it all? Was paradise killing us?

My whole life I have wanted three things: A family, to be involved in politics and policy, and playtime in the mountains. With the first two down, several years ago I committed myself to make a big change.

With every ounce of my being, shortly after Natalie and I had our first child, I tried to relocate us up north to the land of mountains and snow. I dreamed of snowy days like in a Patagonia catalog where my kids and I would cross country ski after I finished work, and where chopping fire wood would be my favorite chore.

I networked like mad from our home in the Washington, DC metro area for eight months and traveled to Montpelier and Burlington to do informational interviews with Vermont housing organizations, the Vermont Energy Investment Corporation, and some mortgage companies. I even submitted applications to Ben and Jerry’s parent company and Green Mountain Coffee.

I began to have back pain that came only in the night. I would sleep for a few hours and had to sit up, or better yet, stand up. Even being up at 2:00 a.m. with Wunderkind, feeding a bottle, brought pain relief, but then I suffered from sleeplessness.

I had X-rays. I went to physical therapy. I thought the pain was from not being strong enough. I though it was from the stress of being a new father. If the job hunt was the cause, it never occurred to me. I got interviews for open positions. It excited me; I felt that I was in control.

But during the last day of my “informational interview tour,” I literally made a wrong turn. I saw some neighborhoods with some young Vermonters and they didn’t look happy. They didn’t look like skiers or even boarders. They were in a different Vermont, where it was cold, and dreary, and the urban music scene they craved didn’t exist.

Days later I quit my job hunt. I knew I could call Vermont home, but would my kids find it as fulfilling? I didn’t want to test it now. Hardly noticing, my back pain faded away, at first, inexplicably.

We Want a Change

I still think that regularly ice climbing in Smugglers Notch or hiking sections of Long Trail would make me happy. Not to mention stopping in at the Alchemist in Waterbury for a Heady Topper whenever it was freshest; it sounded too good to be true. Yet I’ve recommitted myself to the Washington metro area — and I’m good with that for now.

While I love the things I go to Vermont to visit, the reality of the day-to-day might be different than I imagine. The job market is weak, and even then I know people move to the state and buy a house near their job in one neighborhood only to change jobs and be forced to commute an hour one-way. And what would the length of winter and mud-season do for my family being inside more; would we really play outside as often as I think we would? Would we feel cabin fever?

Vermont’s suicides have risen in the last two years. In fact, the suicide rate has risen to a 30-year high, and it is the leading cause of death for young Vermonters (among those aged 10-24).

Since settling on — or, perhaps better put, re-committing to — Washington, DC, I’ve been diligently accepting it as home. It has taken some work; I had to embrace the humidity of summer (baseball games help). And I finally think of the subway as a luxury. I also started planning more regular getaways to New England despite the long-haul drive up north.

My family and I might, one day, still move to the mountains. If we do, it will be because of the mountains are the “bonus” to so many other things that we want, including good schools, an affordable home, steady income, and healthy lifestyle options for all of us. For now, I’m working on making it work here in and around the big city and visiting the mountains in almost sacred pilgrimages during breaks spread out in between.

While we might want a change, the change of surroundings isn’t always what we need. Sometimes the change we need is all in our head.