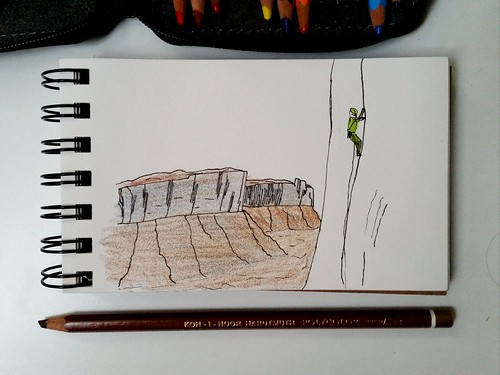 Once, only vertical columns of ice and knife-edge alpine ridges enraptured me. Then a brief visit to the American southwest started to change that. Soon after, photos of the crack climbs around Indian Creek grabbed my attention.

It has also been impossible for me to ignore the pleas for us to write President Obama to create a new national monument around the Cedar Mesa Plateau, roughly where Indian Creek is tucked away: Bears Ears National Monument. This proposal comes from an Inter-Tribal Coalition in Utah, and conservationists from across the U.S., including the Sierra Club, Access Fund and the American Alpine Club, among many others, have supported. I recently sent my own note to the President and I joined another organization, the Southern Utah Wilderness Alliance, to support the ongoing advocacy efforts. Here’s why:

The future of climbing in Indian Creek is now in the midst of a political game of tug-of-war. U.S. Representative Rob Bishop of Utah is proposing a bill that, among other things, would preclude any executive order by a president to name any further national monuments in Utah. He points out that the whole Utah Congressional delegation opposes the Inter-Tribal Coalition’s proposal.

That last point is important, because, as I know from my days as a Congressional aide, the President is well aware that he should not take action affecting a particular state without support from the state’s elected representatives. If Obama uses his executive authority and designates Bears Ears National Monument without due process, without input broader than the Congressional delegation, then Obama’s actions could be contested, overridden, and ridiculed as poor governing.

Bishop has cleverly complicated efforts by introducing legislation that involves how federal public land in Utah would be managed in the future. (An updated version of his “Utah Public Lands Initiative” bill comes out today.) So long as this proposal is under discussion, the President has to tread extra-carefully; Congress has the power of oversight, spending, and authorizing. And most of Congress is staying on the sidelines, for the most part, in order to leave Utah’s delegation to have its say about its home turf. In addition to prohibit designating a new national monument, the bill alleges to “balance” industrial development and conservation efforts, but in reality it conserves new land in Northern Utah, not the canyon county in the south of the Cedar Mesa Plateau.

This is why a meeting on Saturday, July 16th at 1:00 p.m. PT in Bluff, Utah is so important. The Obama administration has called a public meeting to hear input from the region on whether there is sufficient public support for Bears Ears National Monument. It’s a critical test, if not just more input, for whether Obama can and should use his executive authority. Or is there enough input to render the Bishop PLI bill dead in committee (a harder thing to do.)

As a lobbyist with a large national nonprofit, I recently attended a similar public meeting, on a different subject (payday lending), in Kansas City in June. But the reasons for the meeting were similar. It was about the Obama administration wanting to take action it felt was shared popularly by the public, but opposed by Members of Congress. The meeting documented the statements from ordinary people and people with a direct stake on the topic on both sides of the issue. The forum also generated press, which made people speak up and take sides. It was a critical moment to drive and expose public interest and support for where it genuinely lies.

From my perspective in DC, this is the highest profile public lands fight right now. And it has ramifications for other proposals, like turning back larger swaths of federal public land in multiple states back to state government control that could turn it over to industry for resource extraction, rather than the recreational and conservation purposes Americans from coast-to-coast rely on.

There will be more key moments in the effort to make Bears Ears National Monument, but this is the time to either show up and speak in Bluff (RSVP here), even if just to say you support the Inter-Tribal Coalition’s proposal, or write to President Obama by clicking here. And join the Access Fund, American Alpine Club, and/or Southern Utah Wilderness Alliance, because the work won’t end here.

Speak up for Indian Creek, Bears Ears National Monument, and conservation, because there is more at stake than just Bears Ears.