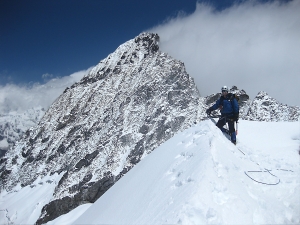 Paul Swienton on the summit of Lama Lamani with Jopuno in the background (Swienton personal collection, rights reserved 2010)

Day dreaming of alpine mountains that are rarely seen and trampled by Westerners can be difficult these days. The Khumbu Valley may seem like it is being overdone. Going to Patagonia is hardly remote any more. The solution might be the Sikkim region of India, which is wrapped in Nepal, China, Tibet and Bhutan.

I recently learned of the region and its potential from alpinist Paul Swienton of Maryland at the Blue Ridge Section meeting of the American Alpine Club (AAC). Swienton was a member of a 2010 expedition of Scottish mountaineers lead by Geoff Cohen, who lead other Highlanders Bob Hamilton, Richard Isherwood, Steve Kennedy and David Ritchie. Together they intended to make only the second ascent of a new route on Jopuno (5,936 m.) in West Sikkim.

Sikkim was explored in the early days by Alexander Kellas — the first authority on high altitude mountaineering — in 1907 and 1921, but was virtually inaccessible for nearly 50 years while China, India and (to some extent) Nepal squabbled over the rights to Sikkim. During that period, few ventured in to climb or hike. The disputes were resolved in 2004 and Roger Payne and his wife Julie-Ann Clyma stormed in to establish themselves as the Western authorities on the climbing there. Payne’s article on Sikkim in the 2008 American Alpine Journal inspired the 2010 expedition.

Swienton reports on the 2010 climb in the upcoming 2011 American Alpine Journal. If you are an AAC member you can read it now before the book is in print in the members-only part of the website. I won’t repeat what he reports on there, but rather provide some interesting and informative pieces that the expedition learned in 2010.

While the expedition’s main objective was Jopuno, the team also climbed the west face to Lama Lamani’s “North Top” (5,650 m.) for a second ascent by a new route and Peak 5,500 m. (between Jopuno and Lama Lamani) for a first ascent.

The expedition attempted Jopuno last and worked to establish a feasible new route for its second ascent. However, due to dangers on the other proposed routes, the group decided to climb the original route up the West Ridge. In addition, one of the climbers was not sending at full strength due to altitude sickness. Around 5,450 m., the team roped up again on another icy section to attain rock, though covered in snow. Further up, the “black rock” section (a stretch of 300 m.) was slow going and it became clear that the day was spent. Fortunately, this climb was more about exploration, camaraderie and alpine climbing.

Conveniently, these were all day climbs from the expedition’s high camps (approximately 4,900 m. for Lama Lamani and Peak 5,500 m. and 5,100 m. for Jopuno.) This allowed the expedition to function to keep gear higher up and maintain a full-working base camp with a kitchen (and plenty of Scotch whiskey) below.

The 2010 expedition members received much helpful guidance from Payne. He recommended the staff of Sikkim Holidays located in Sikkim to serve as the travel agent. The staff, including Barap Namgyal Bhutia, were extremely helpful in making transportation arrangements from Kolkata and Delhi (depending where the expedition members flew in to) all the way to Gangtok and Yoksam, as well as working with the Indian government on the expedition’s behalf.

One piece of advice from this expedition to the next says when hiring guides and porters in-country, be sure you know ahead of time who is expecting to be fed and what their role will be during the journey. There was a little surprise when the porters did not come “self-sufficient” and were expecting to fix ropes on the slopes to boot. So much for the alpine-style climbs! Fortunately, the expedition’s positive attitude won the day and the trip went smoothly.

Over all, the journey gives one hope in virgin peaks in, untamed exotic locations. In fact, consider this last point: there is no rescue service in Sikkim. So many other areas have infrastructure to be ready for the unthinkable. Here, it’s still wild.

Thanks for dropping by again. If you enjoyed the value of this post and many others, please consider following the Suburban Mountaineer on Facebook or Twitter.