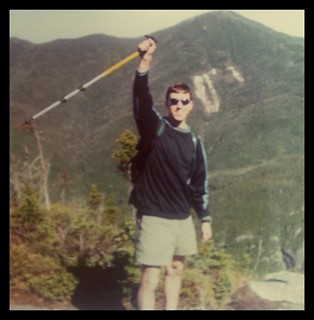 I had finished a 30-mile hike which included a scramble up one of those beautiful, bald summits of the Adirondacks. I came downhill much faster than I had gone up and was carrying a 35-pound overnight pack. My hamstrings and calves were holding up and my trekking poles kept me balanced as I descended — which was more like a controlled stumble — seemingly bouncing from foothold to foothold.

I arrived back at the trailhead, exhausted but in a euphoric state. I leaned my poles against my old coupe, put my pack in the trunk, hydrated with a warm sports drink, started the engine and turned on some punk rock music and drove away down the long narrow dirt road with a triumphant feeling.

Unfortunately, I didn’t realize until three days later that I left my poles in the parking lot. That was 10 years ago this month. I haven’t had my own pair since.

Just last month  I was approached by PaceMaker Stix about reviewing their trekking poles. I hadn’t heard of them before and decided to check them out and see where they stood. After a quick Internet search I counted 18 different brands of trekking and walking poles. It seems only three or four brands are the most recognizable and widely accessible, however, PaceMaker consistently received the highest customer reviews online. I accepted the invitation from PaceMaker Stix to review a set of their sticks and I received a pair of their Expedition Poles.

I worked out a time with Natalie for us to take kids on a hike so I could test them out. The big hike in Shenandoah NP or the Monongahela NF I wanted became unrealistic with our commitments, but a semi-urban hike in the Dyke Marsh Wildlife Habitat along the Potomac was feasible. 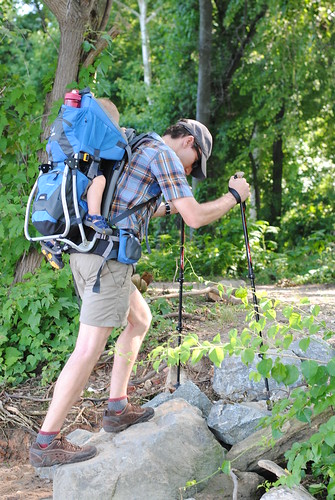 This was also Schnickelfritz’s first time riding in the child carrier backpack. Wunderkind, who rode on my back down Mount Mansfield in Vermont in 2012, was now helping me test the poles.

After some long strides, a couple of leaps from one beached driftwood log to another, and finding some unlevel and occasionally unstable terrain to test ascending and descending, I have five reasons why PaceMaker Expedition trekking poles might be right for you:

1. Sturdy and Durable — They held up to my walking and leaning with all my weight with Schnickelfritz on my back. They are also light weight and appropriately rigid; the tips at the far end of the poles went right where I wanted them — there was no unwanted flexing.

2. Easy Extending and Holding — The flick locks are easy to open, close and adjust them. Even when Schnicklefritz and I bounced from log to log and leaned hard on them, there wasn’t any give. The same was true regardless of what length you choose to set them at. 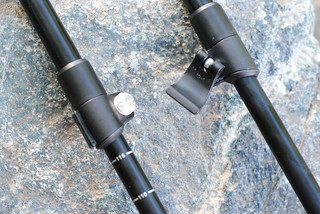 3. Cork Grips and Comfortable Leashes –– The grips on my original poles several years ago were rubber with deep grooves for ventilation. They are great in the winter at keeping moisture out, but clammy. Cork is indeed better and I’m doubtful that they would perform poorly if I were using the poles snowshoeing in Vermont this winter. For most trekking pole aficionados, cork is the only way to go.

4. Affordable Prices — For their quality, these poles are truly affordable. They might even be “cheap” in price but not in performance. My old poles cost $110 for the pair. The PaceMaker Stix Expedition Trekking Poles cost $59.99 and I am just as happy with them. As a parent on a parent’s budget, I’d go with the PaceMakers everytime. 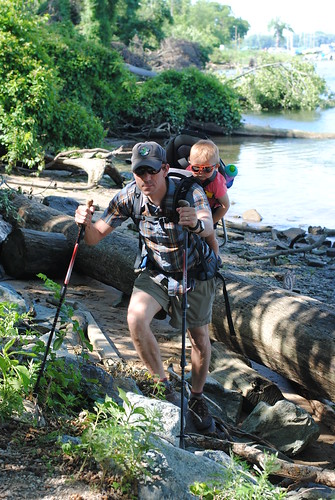 Schnickelfritz on the move, with Dad (Natalie Stern 2014)

5. Consistently Excellent Reviews –– Go online and look on Amazon or Google. PaceMaker fans are vocal. These poles are consistently given higher customer reviews.

By the way, since starting this blog in 2010 I have gotten several requests to review climbing and hiking books and various outdoor products. I haven’t turned down a request to review a book yet, but have turned down all the requests for product reviews. That was until I was approached by PaceMaker Stix. I felt it was something that you might enjoy too. My whole family did… 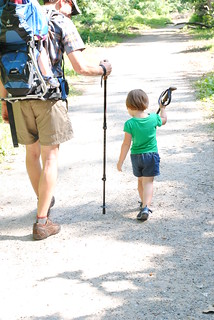