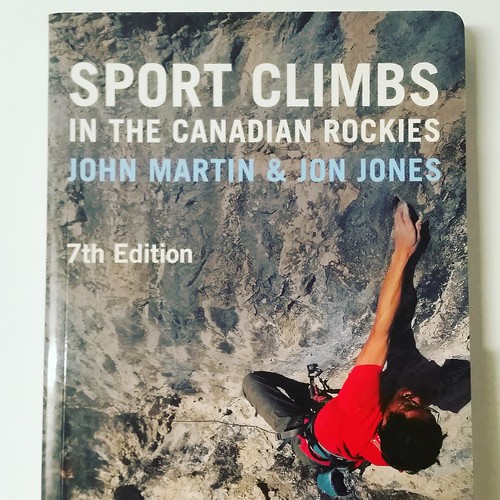 Martin and Jones book is new again, this time in color.

So I hear that you’re moving to Canada. That’s great! (And I understand that you are dismayed at prospects of the impending Trump administration.) So I jotted down some quick recommendations for you on your move.

If you move to PEI, be sure to live near Charlottetown and go have a Gahan beer, but be careful with those sandy cliffs. If your French is up to snuff, you won’t feel like an outsider in Quebec, and there is excellent water ice north of Montreal. If you’re heading to Toronto, there is some modest climbing in Ontario — oh, and you’ll have to get used to buying milk in a bag. British Columbia is diverse and insanely beautiful.

But Alberta… ah… Alberta. That’s where you should go. Settle into Calgary or even Edmonton for a “real job” with lots of benefits and paid vacation time, embrace a hockey team, and drive to the Rockies (the real ones) in a couple of hours. There is ice climbing and several amazingly well developed sport and trad climbing areas throughout the Bow Valley.

Never heard of the Bow Valley you say? Well, have you heard of Lake Louise, Canmore, or Banff? That’s the neighborhood.

When the Weather is Warm

Now, let me tell you about Sport Climbs in the Canadian Rockies...

There are other guidebooks for the area, but this one has been updated most frequently and most recently. In October 2016 the 7th Edition was published. It also covers the biggest territory; not only Banff National Park of Bow Valley, but that and more in the neighboring and contiguous valleys. In total, it covers over 2,300 routes including climbs in Banff, Canmore, Lake Louise, Kananaskis Country, and the Ghost River region.

It’s a genuine techincal guide to the region and the routes. Most of the content are illustrated through topos, rather than photos. There is a reason for this and some practical benefits: First, the valleys are narrow and portions are blocked by other nearby features. Properly descriptive photos are broadly impossible, however, there are photos wherever they were practical.

Secondly, with the majority of the images in topos, the guide lets you see in clear terms what might not appear in a photo, such as belay stations, or a chimney that might only be viewed as a shadow. The minimal descriptions in prose make these maps something to get lost in just in planning.

Martin and Jones have updated the guidebook with this 7th Edition to account for the radical changes brought on by the 2013 rain-on-snow floods. Some routes start lower, due to excessive erosion, while others are starting much higher because of deposited rock and soil. This has complicated some approaches and the start of some climbs. The authors recommend a long stick clipper in these areas, which the guidebook points out.

It’s a beautiful guidebook whether you’re moving to Canada permanently  just visiting, or live in the area. Regardless who you wanted to win America’s 2016 presidential election, you can forget all about it here in the corners of the Bow Valley.

I also want to thank my good friends in Alberta, Joanna and Jason, who separately extended an invitation to Natalie, the kids and I if we had to flee the states after the election. (And they offered way back in the summer before election day; that makes some good friends!) We appreciated the offer, but Natalie and I decided to stay; the American crags, parkland, and climate needs more voices to weigh in loudly here.