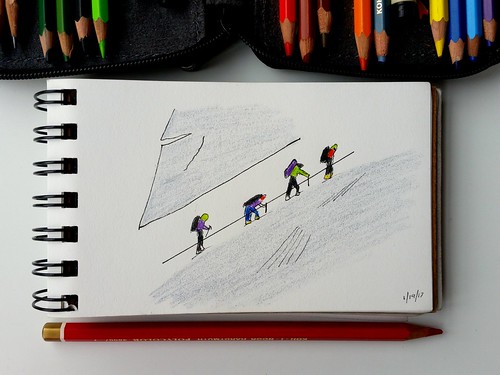 It seems that Smithsonian Magazine online has gotten into the game of writing content with click-baited headlines. I guess you have to when the website has lots of advertising. Well, this article from 2012 has made it around the social grapevine once more, as something to gawk at: “There Are Over 200 Bodies on Mount Everest and They’re Used as Landmarks.”

The writer, Rachel Nuwer, told the story of three climbers that attempted to climb Everest but never made it down. They’re tragic stories. The stories she doesn’t tell are tragic too. But as Robert MacFarlane wrote in Mountains of the Mind (2003), “What makes mountain-going peculiar among leisure activities is that it demands of some of its participants that they die.” By comparison, it wouldn’t be tragic for a baseball player to die sliding into third base; it would be singularly unique and virtually unthinkable.

While Nuwer introduces some new knowledge and shares some short biographies, she doesn’t provide a complete picture of why there are so many climbers lost and still high on the mountain. It’s complex, but I think the understanding all of reasons and factors in play are important for understanding why they’re landmarks, why the bodies remain in place and do not have a more respectable burial, and that nature of climbing on Everest today.

According to Elizabeth Hawley’s notes on her Himalayan Database, 282 people have died on Mount Everest through spring 2016. Not all of the climbers that died are high on the mountain and some others were brought home, though on Everest that’s rare. (If you can’t log in to Hawley’s website, Alan Arnette has climbed and has been writing about Everest for decades, and he has a tremendous amount of resources on his website including some related tables that pulls from Hawley’s research.)

On most mountains, if a climbing partner or a member of an expedition dies during a climb, they’re partners and teammates make every attempt to bring the body home or at least down to the valley. In some cases this can be impossible, unreasonable, or plain dangerous to the rest of the party. In 1936, Toni Kurz was injured on the Eiger’s infamous north face and his rescuers were unable to reach him due to the length of their ropes. They combined two ropes but Kurz was unable to climb past the knot due to his lack of strength through the injury. He hung on the side of the mountain until much later when a team better equipped and better health was able to recover him.

Everest is different than the Eiger, of course. It’s at high altitude, where the air is thin and carrying even one’s backpack is a laboring activity. Climbers are subject to degrees of hypoxia and judgment can be impaired. The ridges on the popular routes are narrow and stumbles are to be avoided. Even then, on the south side at least, carrying a body through the dangerous Khumbu ice fall, where house-sized blocks of ice tip, fall and crush without warning, would risk several more climbers lives.

Let’s also contrast Mount Everest to the second-highest mountain in the world, K2. K2 is generally steeper for than Everest’s flanks, and for longer stretches. When a climber dies on K2 and is stranded, without the reasonable ability to recover their partner, the fallen climber is left to the effects of the mountain. Most of the climbing on K2 is on it’s face — a giant sloped wall. K2 avalanches sweep it clean of loose debris, which is why even the remains of Dudley Wolfe, who was died on K2 in 1939 were found years later by author Jennifer Jordan on the Baltoro Glacier at the base of the mountain. Everest isn’t as steep and has many more “pockets” for the things it moves. But along the major routes that most climbers attempting Everest take, the path is usually along ridges, less prone to avalanching. When a climber cannot go on, he or she usually settles into a personal pocket of snow drift or under a rock, in a storm to deal with their frostbite, edema, and/or fatigue to wait. Many climbers are displaced, but not usually swept away. And more often, exposed to the high altitude sun rays, and constant freezing and thawing, the remains become semi-permanent in the landscape.

Before I moved beyond bouldering into ice climbing, my Uncle Tom would take me to climb the 46ers; these are the 46 peaks in the Adirondack Mountains that rise above 4,000 feet above sea level. They’re mostly in a cluster in the area known as the High Peaks, have bald treeless summits from the harsh winters, and the landscape is a more rugged and northern version of the Smoky Mountains. While we were usually bushwhacking alone up many trails to the top, sometimes we were clearly on the “beaten path.” Other hikers, sometimes right off big 80-person tour buses, were making a virtual conga line up some of the narrow areas. But the wider areas of the trail they hiked side by side; Uncle Tom pointed out to me how the trail and mud got so terribly mucky: “This is a herding path.”

Everest has become a popular stop for the tour-bus equivalent of climbers, the commercial expedition. Today, you can pay a guide to handle the food preparation, most of your technical gear, and expedition fees paid to Nepal or China (depending on the side of the mountain you’re climbing). Hand over $40 – $50 thousand dollars and you’re set. You just train (because, as they’ll tell you, you cannot train enough for this mountain), and they’ll make you a path up the mountain. K2 by comparison, has a growing expedition “bus” visiting, but it hasn’t had a boom of business the way Everest has since the 1990s.

This has made climbing the world’s tallest mountain — the third pole — very accessible to interested adventurers. This is also another reason why so many have perished, in my opinion. While not everyone that climbs is an amateur, this commercial approach to climbing the mountain sets up different expectations of what is expected (making the summit is often one of them.) I genuinely hope things change so that the next climbers don’t become permanent hosts.

Like MacFarlane pointed out, death is part of the deal. But death is always part of the deal. There are more bicycling deaths every year than climbing accidents (400-600:30). So wear your helmet. I am a pedestrian most of the week, so I’m totally cautious crossing the street.

Legendary climbing writer David Roberts is fighting cancer. It hasn’t been pretty. He’s been one of my heroes and I pray for his health, (despite that he might urge me not to waste my time.) It’s made reflect on the 60 or so people he’s known that have died climbing. And yet, he wrote this in Alpinist issue 56 from this past winter, in an essay simply titled, “Death and Climbing”:

It is not climbers alone, of course, but modern Western culture that is hindered by a systematic avoidance of death. We no longer hang self-portraits holding skulls as memento mori, the way seventeenth-century thinkers did. Our poets seldom face the terror of terminal illness as squarely as the Elizabethan Thomas Nashe…

Roberts and other climbers usually avoid the topic of death. I think we need to understand it better. It’s not something to gawk at. It’s something real. It happens to loved ones. It happens on Everest, K2, the Eiger, the Adirondacks, and all around us. I think in puzzling over it, we can understand our draw to climbing and the mystery of things that excite us.

Be safe and be well.