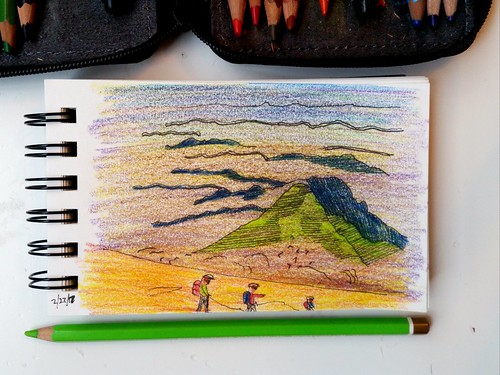 The Retreat. (All rights reserved)

We’ve been told that prior to 1681, mankind thought of mountains as unpleasant boils on the surface of the earth or heaps, or at least some unsightly feature that we were likely to avoid or dismiss altogether. We’ve been told that after 1681, opinions began to shift. This was when Thomas Burnet published The Sacred Theory of the Earth, which we’ve been told that this was the moment when mankind began looking at mountains not as inconvenient land on which to farm but as clues to earth’s past. If something in you rebelled at the thought, because something in believed mountains have always been beautiful, then I have something to tell you.

During Christmas break I reread Robert MacFarlane’s landmark and mesmerizing book Mountains of the Mind: Adventures in Reaching the Summit (2003). MacFarlane brought our generation’s attention to the shift initiated by Burnet through this book. My wife noticed that I had underlined passages and had notes throughout in ink. I was rightly chastised. My only defense was that this was how I took notes in college to help me write papers; I didn’t need to copy every line and make a citation, it was just here. She did make me feel a bit guilty, though I could find key passages with ease.

On the last page, I found a note I wrote after reading it the first time. It was a mild dissent, though without any concrete foundation. MacFarlane’s thesis was that how we experience mountains is all in out imagination. I agree, even today, that how we perceive nature is driven by how things are framed, but I didn’t share his conclusion entirely. I never bothered to try to prove it, but I felt like there were many examples of wildness (which mountains are a part) that were necessary components for finding enlightenment. I mean, think of all the times some character in the Bible went into the wilderness and saved whole populations of people… Moses, Abraham, Jesus, and even Paul to an extent. I even think Daniel would have climbed a mountain, except he was such a city kid; it’s all that he knew. 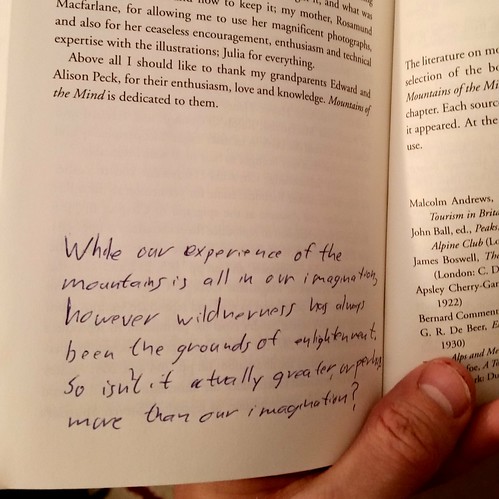 Mountains of the Mind

Robert MacFarlane’s book has been one of my favorites over the years. I regret that I didn’t read it sooner than I did, which was five or so years after it was initially published. MacFarlane tells the recent history of how mankind has looked at mountains and how our contemporary game of mountaineering and climbing has evolved under the lens of previous literature and adventurers. Here’s his thesis statement from the opening chapter:

This book tries to explain how this is possible; how a mountain can come to ‘possess’ a human being so utterly; how such an extraordinary force of attachment to what is, after all, just a mass of rock and ice, can be generated. For this reason, it is a history which scrutinizes not the ways people have gone into the mountains, but the ways that they have imagined they were going into them, how they felt about them and how they have perceived them… It isn’t a history of mountaineering at all, in fact, but a history of the imagination. (MacFarlane, 22-1)

Among retelling his own climbing stories, MacFarlane does a marvelous job at connecting the dots, starting at the end of his book where he recounts in pointillism-detail George Mallory’s intense obsession with Mount Everest (and there is no doubt that the great climber was obsessed, according to MacFarlane or most other researchers,) and tracing back through time contemplating how Europeans, and Britons in particular, viewed mountains. MacFarlane’s key juncture, where his book begins is with Thomas Burnet in the 1680s. While rudimentary, Burnet was the first to suggest how mountains came to be, which kicked-off a scientific look at the mountains. What followed was science, and romantic poets offered wondrous descriptions of the landscape spurred a movement in search of the sublime.

Fundamental to MacFarlane’s view, and retelling of Burnett’s view, is that the mountain landscapes were unwanted tracts of land to be avoided and ignored. A later view offers clues to a conspiracy theory. And we’re all victims.

Thanks to Alpinist, I discovered Dawn L. Hollis, a graduate student at the University at St. Andrew’s. She contributed to issue 57 in spring 2017. And she’s offered a few reasons why our belief that Burnett was a visionary was wrong.

In the Wired column, Hollis wrote a piece titled “Rethinking Mountain Gloom.” She said that three years ago she gave a speech to the Alpine Club (the original one from Briton,) “to put forth an alternative story — a narrative of mountains that were full of activity and written of in terms of the deepest admiration — long before the development of modern mountaineering.” And this included long before the pivot around 1681.

Hollis demonstrates that there was actually some disagreement around Burnet’s dismal characterization of mountains. Herbert Croft, an aged Bishop, countered Burnet that mountains were great, which Hollis quotes. Others also dissented, and Hollis concluded:

Burnet was an unusual early modern figure… but not because he occasionally found mountains to be wonderful. Rather, he was strange precisely because he shuddered at them, and suggested that they were not God-given.

The article is well worth seeking out and paying full price for a back-copy if necessary, particularly as she goes back deeper in time to uncover numerous examples of praise and adoration of mountains from literature to art.

Hollis goes on to explain that there appears to have been a sort of cover-up, or revisionist take that used Burnet’s view to promote the value and significance of mountaineering. Through the Alpine Journal, members entered their historic ascents and presented perspective, through a revisionist lens to deliberately cast pre-mountaineering activities in the mountains as antiquity and unenlightened, essentially. More interestingly, Hollis demonstrates evidence that successive writers were influenced by these subtleties and followed suit, perpetuating the myth.

I wish we could take a second crack at MacFarlane’s take. Perhaps we’d have to reach back farther than Burnet’s work to make it complete. The story is still true, but as Hollis showed, there’s more to the story.