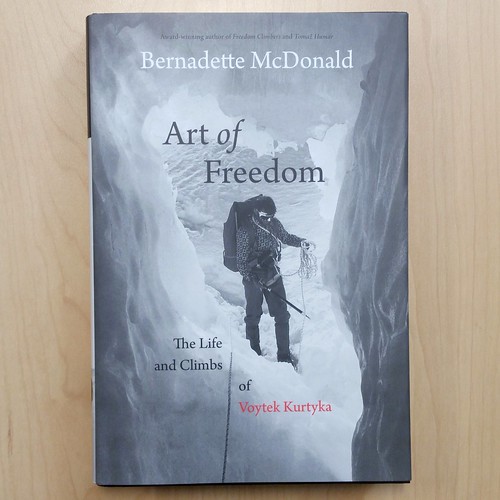 The cover of Art of Freedom by Bernadette McDonald with Voytek Kurtyka on Lhotse 1974.

The newest great climbing book to be released is Art of Freedom: The Life and Climbs of Voyek Kurtyka by Bernadette McDonald and published by Rock Mountain Books (CA and USA) and Vertebrate Publishing (UK). I read it and I think it’s going to have more longevity in readership than even her previous award winning books.

By now, I hope that you are somewhat familiar with Voytek Kurtyka. It’s okay if you’re not. I didn’t know who he was though I associated his name with Robert Schauer’s whenever anyone mentioned the legendary first and only ascent of the West Face, or Shining Wall, of Gasherbrum IV, but I knew so little about him he didn’t yet stand out. McDonald’s award winning book Freedom Climbers (2011) told us more about Kurtyka than any other English language source to-date, to the best of my knowledge. While Freedom Climbers was about many, but certainly not all, of the great Polish climbers of the 1970s and 1980s, including Wanda Rutkiewicz, Krzysztof Weilicki, and Jurek Kukuczka, was clearly evident that Kurtyka was a gifted star of his generation, and possibly of all time.

However, Kurtyka diligently sought to keep his ego at bay. He was repulsed by his own fame, which made him quite mysterious, and not just to an American like me but even young Polish climbers in the 1990s weren’t aware of his remarkable alpine climbs in the Himalayas; they thought Kurtyka, who was then in his 40s, was merely a talented rock climber (Art of Freedom 257). What was to glean about Kurtyka, if one knew to inquire, came from stories from older climbers, which I’m sure sounded partly like tall tales of mountain adventure. Documenting his exploits were easy; they were in alpine journals, and Kurtyka even wrote short pieces periodically. Piecing together his approach, accomplishments, the source of his vision and joy, however was left like a loose mosaic that had fallen to the floor. Kurtyka didn’t mind, because he knew who he was. McDonald, over years pieced the mosaic back together, and it’s the Art of Freedom.

McDonald may have been among the actors gently nudging, without coordination, Kurtyka to accept the Lifetime Achievement Award from the Piolet d’Or. Kurtyka respectfully, but emphatically, declined at each attempt not only because of his avoidance of the spotlight, but his values. McDonald, starting with Freedom Climbers, and then with the interview in Alpinist, earned Kurtyka’s trust. She interviewed Kurtyka in Alpinist 43, which provided readers with a more personally revealing look at how Kurtyka approached his climbs and life. It didn’t completely answer my questions about him though; rather, it gave me insight I didn’t have and yet more questions. Art of Freedom answers my inquiries, and yet I am still mesmerized by Voytek Kurtyka. 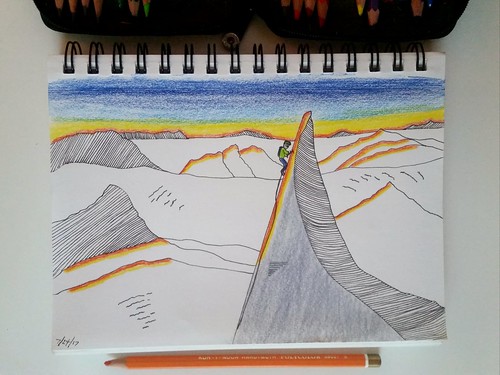 As McDonald makes clearly evident, Voytek Kurtyka was extremely self-disciplined and still wildly passionate. He was also intensely self-aware of both traits, and he understood that if his ego was fanned, whether it was his climbing accomplishments or his knowledge of plants, he could harm his psyche and his beautiful qualities. So in opening up to McDonald was perhaps her greatest accomplishment. The next was how she took his stories, and the historical input from documents and first-hand stories of friends and colleagues to show, not just tell, who Kurtyka was.

Before the I started the reviewing the book, I had four personal questions that I wanted answered:

Let me share a little of what I learned without spoiling the reading experience:

How Did He Become Such a Remarkable and Humble Alpinist?

Kurtyka came to climbing relatively late, in his early 20s and found a satisfaction in connecting with nature, which he was deprived of in his urban home. He was unconventional and rebellious, perhaps by nature. He rarely did things the way everyone else suggested; in climbing he was an original. In Poland, climbing was something that was heavily regulated through the climbing clubs. It had in place a strict regime of course work and advancement toward harder and longer climbs, as well as places authorized and unauthorized to climb. Kurtyka skirted all of them. He learned to climb from friends, climbed wherever he wanted (including being stopped by the police), and climbed solo often.

This approach to climbing in Poland’s Tatras carried with him and was refined when he was invited to climbs in Afghanistan and the Himalaya. He learned that climbing siege style, even with Reinhold Messner himself, was in conflict with who he was as a person and a climber. After some trial and error (i.e. life experience,) Kurtyka found that what mattered wasn’t even the summit to him, but the shape of the line he was attempting.

As for humility, he forced that upon himself. McDonald presents enough information and stories that we could perhaps argue another perspective. Shoot me an email after you read it if you have one; I’d like to hear your take.

How Did He Develop His Spiritual Sense?

This answer starts with his father. Kurtyka’s father was writer Henryk Worcell. Moving to Wroclaw, Poland’s fourth largest city was stimulating for Worcell to be around other artists, but stifling for Kurtyka who longed for nature. This was all the more true as Worcell was both a religious man and a drinker; the drinking often disrupted the whole house, including his two brothers and mother Antonina Moszkowska. Bernadette explains that during those early years, Voytek rejected “the basic tenants” of Christianity, that his father subscribed to, yet he still experienced spiritual moments when he did visit churches, in nature, and when he climbed in the mountains. Bernadette said that Kurtyka made connections with places that “reached far beyond his intellect” (21)

While not everyone he climbed with experienced the same feelings Kurtyka did on his climbs, but everyone he climbed with would probably agree that he was in tune with something intangible and part of it might have been that he was simply open to it? Take for example what McDonald describes the “most ethereal experiences of his entire career as an alpinist” during his traverse of Broad Peak. Kurtyka felt “confidence, trust and a sense of unity with space and light.” Kurtyka likened it to a delirium. But Kurtyka didn’t want to let go of it, so he relished in it and paced on a col, not wanting to go into the tent (158).

While Kurtyka may have been open to such experiences, he also found them routinely in climbing. His climbing clearly fueled his sense of peace. I’m not sure, but I got the feeling that he believed his ego could squash these memories of these feelings; perhaps as long as he respected that the feelings of confidence and such were not his, that he did not deserve them, he could hold on to them.

What Did He Do to Make a Living?

I understood from Freedom Climbers that many of the Polish climbers smuggled in foreign goods from their travels during their expeditions, but I wasn’t sure what that meant in practical terms. Kurtyka was living under communist rule; so what did he allege he did to authorities? What was involved in the smuggling? What did he trade? How well, financially, did this put Kurtyka?

McDonald gives a much more detailed understanding of Kurtyka’s business operations and all of their tedium, adventure, and misadventure. First, Kurtyka would smuggle alcohol into Pakistan where it was only sold on a black market. He’d meticulously pack barrels of expedition gear and strategically place his commodity. He’d pray that even if they were opened the alcohol would go unnoticed. He also played with the guards in unexpected ways but boldly opening the containers and showing the inspectors the contents and swapping a barrel with the alcohol with one that did not. Once in, he would sell or trade his goods for items that were demand in Poland. Later, he expanded to selling goods, such as fashionable sheepskin coats, in France, and chewing gum in Russia. On at least one occasion, he floated barrels down a river back into Poland to enter undetected, holding on to them for the entire journey.

The business was good and he only had to do business twice a year to support himself and his climbing. Kurtyka’s friends vouched for him as an employee at a job he never did. Today, he is still an importer and exporter, though probably under more legal conditions.

Was He Truly as Beautiful as a Person on the Inside as I Imagined and Wanted Him to be?

For me, Kurtyka has been almost a mythical figure, both for his climbing accomplishments and his connection to nature and spirit. He may not be as mysterious after reading the book, but I think he is no less intriguing, which is why I plan to read Art of Freedom again shortly when I vacation in Vermont. There is a lot to take in, from his ascent up the Cyclotron, re-reading about Shining Wall, and his rock climbing soloing in the 1990s.

I highly recommend this book. Buy it now and read it. Put it on your Christmas list for your friends. Perhaps give it to your budding climber or your student graduating high school or college next spring. McDonald crafted a significant biography of Voytek Kurtyka that has enough lessons of success, failure, and maintaining joy through it all that goes beyond climbing and can apply to how we can all live our lives. Kurtyka would likely discourage any of us from emulating him, but I think he would encourage us to be confident in our self identities and to seek beauty in others and around our world and guard it.

Thanks again for stopping by. If you enjoyed this post, you might enjoy receiving my monthly newsletter with more climbing history, news on upcoming books, and climbing art by some talented artists.