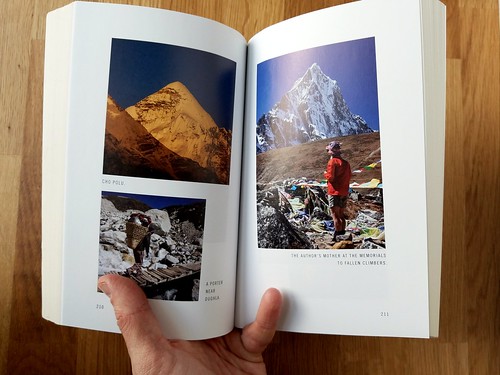 The Himalaya in Glasnovic’s A Few Feet Short.

Before Jamey Glasnovic headed back to Nepal and the Himalayas, this time alone with his bicycle, he wrote what I had started to think:

What of course could be more important than living an adventurous and fulfilling life?

The answer, of course, is work. A dirty, four-letter word if there ever was one… If you grow up in middle class in the Western world, certain expectations become a part of your every-day life, whether you like it or not.

Jamey Glasnovic wrote bout his second visit to Nepal and the Himalayas in his new book A Few Feet Short: An Uncommon Journey to Everest, published by Rocky Mountain Books in 2018. After visiting Nepal several years earlier, Glasnovic had been facing health and life challenges leaving him lost at home adrift among the Western middle-class. Begrudgingly, at first, he packed a few key things, including his bike, and flew to Kathmandu to wander the towns and the hills leading up to the base of tallest mountain in the world.

Glasnovic decided to take this journey right before he turned 46. I turned 40 earlier this week. Although 40 is a milestone, age 45 is the time when many Western middle class men start to face a mid-life crisis. Glasnovic clearly faced one, and I hope to avoid one; Glasnovic’s advice is to slow down and live deliberately, not necessarily conforming to the prescribed path of culture. That’s why Glasnovic went to Nepal. I’m taking notes. 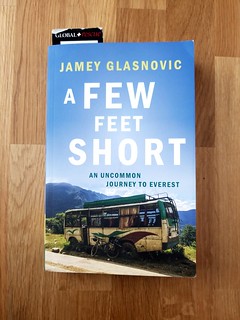 Glasnovic was a bar tender with rising blood pressure heading him down the path toward a stroke or heart attack. His doctor asked him if he had some non-alcoholic beer at the bar. Glasnovic replied that it wouldn’t be as much fun. It just took time to realize he needed a lifestyle change.

Slowly, Glasnovic changed his attitude and agreed: living and living meaningfully were two different things. While he could go “all-guns-a-blazin'” with his friends at the bar or trying to make every day the best day of his life by more and more thrills, to the detriment of his wallet and his health, he decided he needed to do something different.

Nepal took on a practical and romantic meaning for Glasnovic. He appreciated the landscape, the people, and — now — how different it was from his current lifestyle. But in going, going to visit wasn’t enough. He needed a challenge. He needed something to make this life journey a quest. So he wouldn’t just visit the landmarks via car and bus, or even a pied, no, he’d ride his bicycle. He was also certain it hadn’t been done before.

If I didn’t take Glasnovic so seriously, and didn’t empathize with his life changes so much, I would have laughed more early in the book; he was quite funny about his reluctance to actually ride across Nepal. It was cynical. It was also anything but positive. It was funny, but underlying all that it was also sad.

Of course, part of the plan of his journey riding from Kathmandu to Everest base camp was a change of scenery and take a slower pace than back home. As he struggled with the anxiety of the journey, he did have time and procrastination was convenient. But he still had to shift his approach to tell himself to slow down, relax, the town isn’t going anywhere. His bike trek isn’t going anywhere.

After he wandered Kathmandu for several days, visiting the tourist-congested neighborhoods and the lesser known and places the foreigners rarely see, he started pedaling. He took in funeral tradition at river, the likes we never see in the Western world. The deceased are wrapped in colorful cloth, dressed in flowers, and carried on a stretcher to the Bagmati River. There the deceased are burned to ashes in front of the whole family and gathering. It was hardly a private affair; Glasnovic could just stop and watch, meanwhile the traffic along the path by the river simply routed every else around.

The traffic, when it wasn’t merely manic, it was curiously reckless. Many rode motor bikes, and while the drivers wore helmets, well… why don’t the passengers? 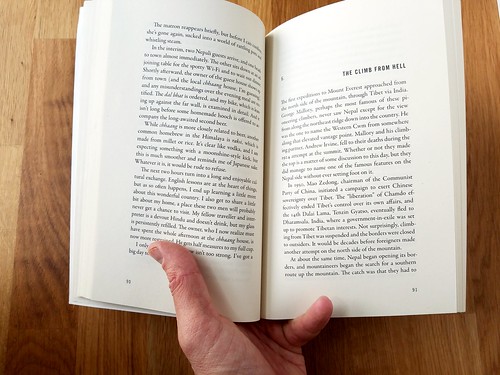 As Glasnovic pedeled for days uphill toward Everest, he began to finally appreciate the journey, despite the pain and aches as his body found a new groove. Nepal was poor. Nepalese didn’t have much. Nepalese worked hard. And they were joyful. Perhaps he didn’t want to get too intimate to find out the outlook for the Nepalese, but he’s convinced they had a lesson for someone like him.

Glasnovic argues that Nepal has it hard, but maybe they have a lesson for we Western adventurers and Western middle-class workers, both in our rush to the Himalayas, Rockies, Alps, or even to our jobs. Maybe the problem is how we measure everything:

We measure distance in time, not miles or kilometres. Speeding up the experience of travel has changed how we view each trip. Movement becomes about the intervening period to the destination, and the ground covered loses significance. The focus is on being here and getting there, and te details simply pass us in a blur.

I recommend A Few Feet Short. I don’t recommend it because of Glasnovic’s journey, but because he helps open eyes. We ought to be aware of what norms are cultural and pushed on us, not to rebel, but to know what inside and outside us hold us back from being at peace.

One thought on “A Few Feet Short by Jamey Glasnovic”