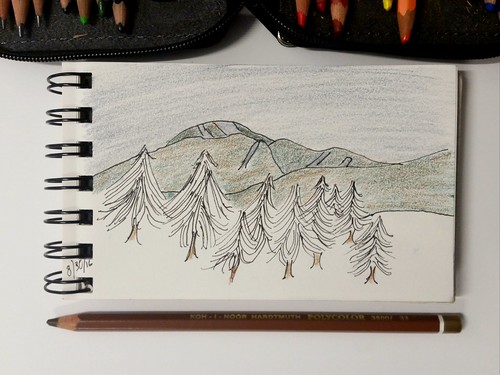 Winter in the Adirondacks. (All rights reserved)

It started as a mere 36 titles in December which grew to about 60 in January, and now, a month later, it stands at 98 books. It’s no longer a list of just classics, but books that could be modern classics, and ones that are trendy or influential, and those that simply interest me. The goal, as I mentioned in my previous post, is to help me be more intentional and satisfied in my reading.

I reviewed all of my clippings in Evernote and my notebooks with book recommendations, names of authors, and then looked over Banff Mountain Book Competition winners in the Mountain Literature category, and winners of the Boardman Tasker Award. Then I removed books that didn’t interest me and I did not think, from what I knew about it, would be a classic or modern classic. I could always change my mind.

To get myself started, I then looked over the list at what excited me most and decided to focus on those. I will either obtain them from a library, my local bookstore (not a chain,) or Top of the World Books in Vermont. My short list — the start of a tick list — was supposed to be 10 titles, but I decided to include both of Nick Bullock’s books and Andy Kirkpatrick’s books, so it came to a rounded list of 10:

While I was developing the list I have been reading Found by Bree Loewen (2017) as I knew it would make my list and I already owned a copy.

If you look at the spreadsheet I included, I have a handful of obscure titles about Alaska. I love Alaska, so my list has another bias regarding the state’s mountain adventures.

During this project, which will take years, I am still going to read Alpinist Magazine, books on fundraising, management, social issues, and fiction but the books on this list are part of a different quest. I am seeking their insight about climbing, humanity, and drawing on the power they felt among the mountains. And it is not romantic bullshit. As Amrita Dhar, professor in English at the Ohio State University at Newark, said, “Mountaineering is the most literary of all sports.” We go, we come back, we write and the best writing is the introspective that borders on the metaphysical. It’s a theme that has been done by hundreds of climbing writers and it makes the best climbing stories. And most interestingly, it’s unprompted. We haven’t been taught how to write about climbing, but those of us that have been brave enough to go into the mountains have come back talking deeply about our humanity.

One day I hope to make a list of what would be the must-reads, having read many of them. I will probably add to my list of 98 and maybe even remove a few to keep the list manageable. But regardless, I hope to learn from the writers and apply it to my own more modest mountain adventures. I will keep you posted on how it goes.