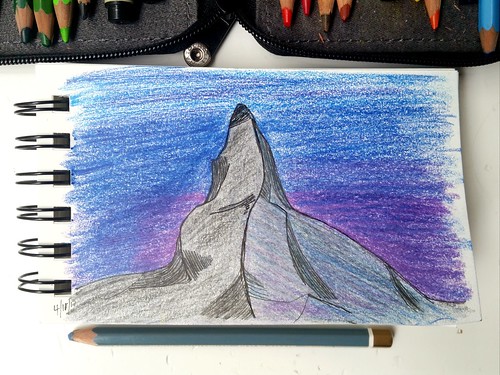 While the literature from the 1900s to the present is rich with mountaineering content, I once assumed that everything from the 1800s all read like something long winded by George Eliot with pages turning over without a period or other final punctuation mark. Then someone in a group of climbing book collectors that I used to belong remarked that Scrambles Amongst the Alps in the Years 1860-69 by Edward Whymper (1871) was surprisingly very readable. Well, I regret that I didn’t read it sooner.

Scrambles seems to have been the quintessential adventure book for budding mountaineers before Maurice Herzog wrote Annapurna. After reading Scrambles I couldn’t understand why it was out of print; it ought to be like those classics whose copyright long expired and every book publisher knows someone will buy if the edition looks handsome enough.

Of course, there’s a trend, supposedly, where people claim to have read things that they never have read and have no intention of ever reading. This is one book, I suspect, people have lied about reading. With all of the secondary sources and authorities citing it, it’s easy to feel like you read it because you’ve gleaned something from other people’s Cliffs Notes, right? Scrambles contains classic stories that have been retold by Robert MacFarlane and David Roberts, just to name just two other modern storytellers. But if you want to be credible on the subject, this book must be on your reading list. 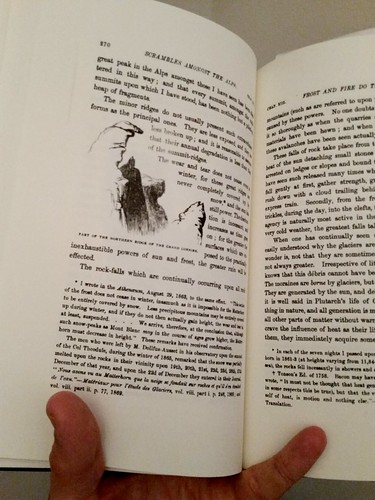 Scrambles Amongst the Alps. (All rights reserved)

Edward Whymper was an English tradesman making a living as an illustrator and engraver, who managed to have the means to travel to Europe and take-in the wonders of the Alps. He visits obscure towns, seeks out guides, makes first ascents, and is party to and witness to the first attempts on the mighty Matterhorn, including the tragic fall. The ascent of the Matterhorn isn’t quite what Annapurna is in terms of dramatics, however, the travelogue nature of Scrambles puts it in a different category altogether. Whymper is surprisingly conversational and an excitable geek, spending a whole chapter on a train through the Alps and the engineering of tunnels. (His enjoyment of the technical, particularly around the Fell Railway and the great tunnel drilled down to hand drawn illustrations of the train’s brakes and sentences like, “This greatly diminishes the up-and-down motion, and renders oscillation almost impossible.” (I skimmed this chapter, as I read it primarily for the climbing.) He also offers readers recommendations on where to stay the night and places to be avoid, because, as he might say it tersely today, the hosts don’t know what they’re doing in the kitchen.

One sequence I found particularly amusing was when Whymper was climbing Mount Pelvoux. His guide, Old Sémiond, claimed to have been to the top before and knew the way. Instead, they spent an extra night on the wrong part of the mountain and Old Sémiond continued to insist he knew the way, even redirecting the party to avoid the ice, which he had “a strong objection to.” Whymper became his own indefatigable guide, knowing much more by instinct than his hired help.

Whymper’s attitude and language throughout the book is candid and fascinated by the unique (which is still unique today, interestingly, ranging from history of the region to the challenges of climbing,) and at times a little cheeky. While the titles of the chapter, not unlike the title of the book, are matter-of-fact and bland, yet the prose is surprisingly frank, laying judgments about history, terrain, and the company around him. 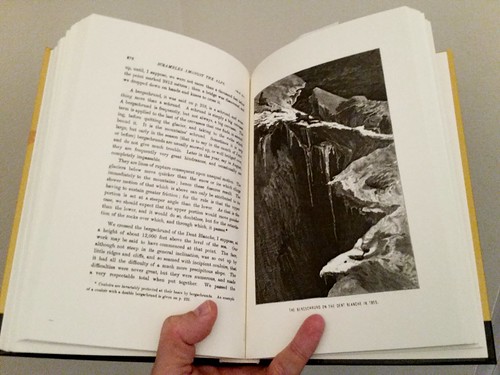 Crossing a bergschrund. (All rights reserved)

Scrambles tells Edward Whymper’s journey through the Alps and the people and challenges along the way in climbing them, as Whymper goes about peak bagging. The great fall on the East Face of the Matterhorn, after the first ascent, however, does not disappoint. And he does more than an adequate job of showing the reader what it felt like to watch his teammates fall 4,000 feet to the glacier. They paused, unable to move, for fear their steps could repeat the same horrible missteps to the bottom. His final advice to his readers may be applied to life, as well as mountain adventures: “Do nothing in haste; look well to each step; and from the beginning think what may be the end.”

Scrambles Amongst the Alps in the Years 1860-69 by Edward Whymper one of the most charming books I’ve read. It is a combination of period-travelogue and a first-hand account of early climbing in the Alps that cannot be supplemented by secondary sources. It is available through Top of the World Books, the American Alpine Club Henry S. Hall Mountaineering Library (members of the AAC get books shipped for free,) online, and, if you’re lucky, some old dusty copy might even be at your local library.