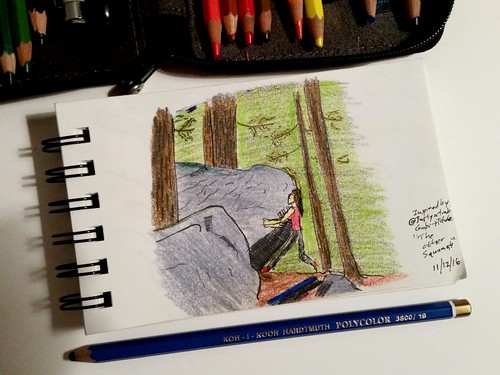 The Banff Mountain Film & Book Festival is in the fourth year of going beyond honoring great films and books to also awarding great mountaineering articles. This year there are four finalists that are all outstanding, but for different reasons.

James Edward Mills wrote “The Force of the Soul” in the Alpinist 60 to profile a racially significant, yet underrated climber named Hughes Beauzille. Andrew Allport wrote “Suicides and Pirates” in the March 2018 issue of The Climbing Zine, which was a personal tour of the climbing life that I have since reread twice (making a total of three reads.) Ed Douglas wrote “The Other Annapurna” in the July 2018 issue of Rock and Ice, which goes into a significant climb on Annapurna’s South Face by Yannick Graziani and Stéphane Benoist that was overshadowed by the frenzy around another alpinist on the same face (sorry, there is no link to the article available.)

Alison Criscitiello wrote the most haunting of the finalists in “Contraindications” in Alpinist 59.

As Alison points out in her bio, she loves the cold. To make a living, Alison is a glaciologist and Technical Director of the Canadian Ice Core lab at University of Alberta. She also serves as a climbing ranger for Parks Canada and has guided expeditions to peaks in the Andes, Alaska, and the Himalaya. Her track record and consistency has also earned her grants to help her climb professionally, including the 2016 Mugs Stump Award (here is the announcement from Alpinist), which she received with her climbing partner Anna Smith, to attempt Brahmasar II and The Fortress in the Garhwal Himalaya, India. That’s where Alison’s bio stops and where “Contraindications” takes over.

Alison opens with several anecdotes, that, if like me, upon first reading, you don’t know why these stories of she and Anna in the mountains are so important to what is about to happen. We learn how close they were, and how much Alison deeply admired Anna. Alison’s prose in each one are both precise and mysterious — precise in that I can see and feel the cold air and pine trees below, but I feel like we’re destined to see a spirit.

Her language is precise in illustrating through examples how different she and Anna were. Before they leave for their big expedition to the Garhwal Himalaya, Anna texts Alison to say how nervous she was. Alison replies even if they didn’t make any summits, she would guard Anna’s life like a sister, and she would still be happy. Anna texted back: “Oh, I’ll get over it.” Was it the nervousness or the summit? But Alison successfully established their bond.

In the Garhwal, Alison and Anna had to change their objective because of the effects of the monsoon on their destination. After consulting Freddie Wilkinson, who had established “daring” new routes in the region a few years earlier, they headed for the Himachal Pradesh, sheltered from the monsoon where, according to Wilkinson, there was “alpine gnar galore.”

As the two of them had done dozens of times in less remote locales for years, Alison and Anna went into the backcountry seeking unknown objectives. Here, Alison tells us of examples of what I think we all do when we go to new places a little excited but completely unfamiliar, we think of comforts: ” I felt as though I were rising through layers of dreams. Flashes of home life — turning on the kettle for coffee, watering the jade plant that sits on my pine desk — came vibrantly to mind, then faded away.”

After arriving at their advanced base camp they started to advance to the peaks, but Anna lips turned white and turned short of breath then vomited. It looked like AMS. They started to descend back to ABC, but it became clear that it was ketoacidocis — complications of diabetes. For three days, Alison watched Anna as she “shuffled around slowly in a thirty-foot radius of our base camp tent.”

It’s a tragedy, but here’s where I will let you read the article for yourself, but with this one passage:

At night, I shattered into the landscape. Images of Anna — skipping across the river ahead of me, watching tennis and eating sesame bagels in Canmore, shaking the tent on Mt. Robson with laughter, running and climbing and drinking whiskey in Skaha — suddenly lost shape and faded, and I descended into murky, bogged woods where a shape-shifting threat waited behind an oak tree at night, hiding something behind its back. Terrified of getting out of my sleeping bag, I talked to Anna and clenched tiny prayer flags in my fist. I repeated Om mani padme hum for hours until the sun rose, dim auburn on the horizon. My only true belief is in science. It is absolutely absurd and out of my character that I was chanting. I did anything I could to distract my mind.

I had to look up contraindications in the dictionary. It’s mainly used in medicine and is the opposite of indications, as in indicating and directing the use of a particular medicine. But contraindications are the signs that point to not using medicine. After Alison sent messages to Anna’s mother and Anna’s partner from base camp, Alison contemplates the hardest question of love and risk: “What, really, was contraindicated? Oxygen-starved alpine objectives and a family and community at home held close? Climbing and falling in love?”

I read all four finalists, and I think Alison Criscitiello’s “Contraindications” in Alpinist 59 is deserving of the Banff article award. Read it for yourself and let me know what you thought, email, send me a message; I’m not hard to reach.

For a little more background on Anna Smith and her final visit to the mountains, the CBC published this online article with several photos that also appeared in Alpinist.