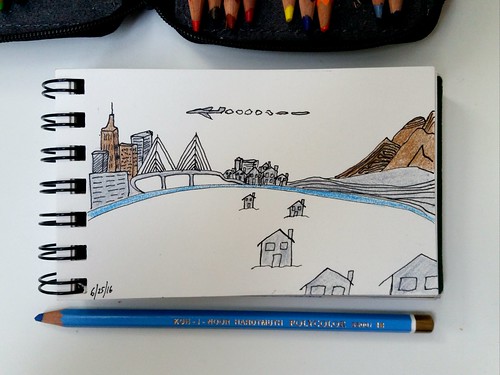 “Climbing matters” has been part of the tag line for TSM since I started writing it while working in bleak, peakless, Washington, DC eight years ago. By “matters” I have always meant important or significant, as in climbing matters a lot, not a set of topics, or climbing matters to discuss. To me, the tag line has always been a solid values statement. It matters to me, and I hope to share how and why it should matter to you too. But I recently have been asking myself, does it always matter or am I just fooling myself?

The world is mostly made up of nonclimbers. While people say that climbing has reached the mainstream, the feats of great climbers has always been promoted to the nonclimbing world, and climbing is indeed more accessible, but there is still an opt-in clause to climbing. And even then, is Jimmy Chin’s film Free Solo going to inspire my nonclimbing film-going friends take up even gym climbing? Maybe it will for some kids.

Life is more than climbing. For me climbing is a lens to see not just mountains but my life. Brandon Leonard in Sixty Meters to Anywhere that climbing centers him. Nick Bullock and Kevin Jorgeson, through separate experiences, both claim climbing changed their lives. And still, there is more to life than climbing. We still go to a job to make money, support a lifestyle, be responsible (at least to some degree, right?), celebrate birthdays, and spend time doing nonclimbing things with people we like to be with.

I recently stumbled back to this brief passage in Kelly Cordes’ book The Tower, by chance. Here, Cordes arrives in Patagonia a year after Hayden Kennedy and Jason Kruk debolted the Compressor Route:

When I arrived in El Chaltén in January 2013, I had a hard time seeing the outrage over the debolting I had heard and read about. Climbers and trekkers were everywhere, locals were busy dealing with the tourists, and unprecedented spells of good weather had settled over the massif.

Nearly everyone I met was kind and welcoming, despite many being stressed and overworked. One day, I spoke with a year-round resident named Poli. Her observations matched those of most non-climbing locals. She said she doesn’t know anything about climbing — these “nails” [Maestri’s old bolts] everyone was talking about last year were things she couldn’t even identify. Of course she knew about the controversy, everyone did, but to her it didn’t matter. She would never go to Cerro Torre, she said.

If you know about “these nails,” folks knowledgeable about Cerro Torre’s history or that read Cordes’ book, it’s hard not to have an opinion of Cesare Maestri, Hayden Kennedy, and Jason Kruk. They’re either heroes, liars, cheats, or assholes. Maybe a little of each. I think a case could be made that they’re all audacious for different reasons. I personally don’t care if you know about the the Compressor Route and it’s history, though I think it is very interesting and that there is a lot for everybody to glean from it. Overall, I think the drive and cleverness of the men and women of action that made them go to the mountains in the first place is critically important to us being human. Still, I could see why people don’t bother to look into climbing’s stories.

And if you really don’t know about “these nails,” life is busy enough with out them, right? We are all working to support our lifestyle or reaching for the next higher lifestyle. Whether we are poor and trying to earn food, rent, and keep the heat on, or trying to be middle-class buying better food, paying off the mortgage, and saving for a nicer car, everyone is busily keeping up with their life. And it’s hard. We make it hard, especially in Western society, keeping up with a standard of living we have or are pretending to have. Nick Bullock, a mountaineer and author of Echoes: One Climber’s Hard Road to Freedom (2012) and Tides: A Climber’s Voyage (2018), was told the formula for a successful life by his father: You should get a good job that you’ll keep forever for financial security, one day marry, and one day die. I was taught that too, in fact. But it lacks any beauty, inspiration, or soul, doesn’t it?

Even if we take Bullock’s father’s formula as doctrine, we still pause to think about things being easier or better with ease, don’t we? Unless we’ve shut that part of our imagination off. To help us break free of the formula, Bullock found climbing and so did I.

But for a lot of people, that’s not true. To those for whom climbing doesn’t matter, climbing is inconsequential, mere recreation, and, at worst, pure and dangerous frivolity:

The nonclimber’s opinion of it as mere recreation and frivolous doesn’t worry me as much as dismissing climbing as inconsequential. Fortunately, it’s not a climbers-versus-nonclimbers struggle. There are lots of degrees of appreciation. Even Poli doesn’t have to climb to appreciate it; at least she recognizes it as part of her community.

The threshold of appreciating climbing, where it starts to matter, it seems, is acknowledging a restlessness inside us, or that we seek something more than the world where some things do not matter. Maybe what we need to recognize is that we want to matter. Do we matter? Do you?

One thought on “When Climbing Does Not Matter”