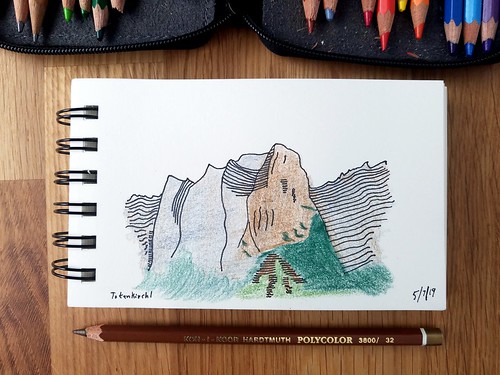 Totenkirchl and the first first solo ascent. (All rights reserved.)

Have you heard of Paul Preuss before? Or what about W.P. Haskett Smith? Hopefully you were not in the dark like I was. If you were, let’s catch up together…

I stumbled on Preuss first while I was reading Mark Synnott’s The Impossible Climb and later listening to the podcast The Runout by Chris Kalous and Andrew Bisharat, I came across Preuss within weeks of each other. Paul Preuss was the first person to devote himself and promote a special climbing ethic that is like modern day free soloing.

However, as Mark Bullock pointed out over Twitter to me recently, W.P. Haskett Smith (1859-1946) started modern rock climbing. In the Lake District, he was increasingly drawn not just to the hills but the cliffs. And he attempted them without ropes or aid or any kind.

Kalous and Bisharat were talking about Jim Reynolds’ feat on Mt. Fitz Roy in Patagonia (which if you don’t know about, please click this) and they talked about Paul Preuss. Synnott talked about Preuss in providing a history of free soloing. Smith is seems to be overlooked as a free soloist because he is generally accepted as an rock climber so early in the game. Preuss on the other hand, was intentional, and wrote several essays on the about climbing ethics and the purity of free soloing.

Taking a closer look, I realized Preuss has been coming up more often since Alex Honnold free soloed El Capitan. However, the association with Jim Reynolds’ free solo of Fitz Roy might be more appropriate, however. That’s because Reynolds, like Preuss, downclimbed whatever he free soloed. Repeating Kalous’ and Bisharat’s wonderment, could you imagine if Honnold, after reaching the top of Free Rider, then started down climbing and had to reverse the karate kick and go back down the Free Blast slabs?

Preuss was born on August 16, 1886 and lived in Austria, by his Hungarian father and Austrian mother. His father was Jewish, which caused history to forget about Preuss’ contributions for several years after his death in 1913. He practiced and evangelized a pure form a climbing that was free of bolts and aid: free soloing.

Preuss wrote several essays (with an English translation by Randolph Burks available here,) and has consolidated his beliefs into six principles. These principles were first written in 1911 in the essay Artificial Aid on Alpine Routes: A Reply by Paul Pruess in Vienna. The essay is available in the link I shared.

Please go read Preuss’ translated essays. They’re worth the effort. (By the way, I had some difficulty downloading the PDF, so just read them online.)

So the answer, of course is W.P. Haskett Smith, if you say who is the first to free solo. But who was the first intentional and devoted free soloist? I think that title belongs to Paul Preuss.

One thought on “Who Was the First Person to Free Solo?”