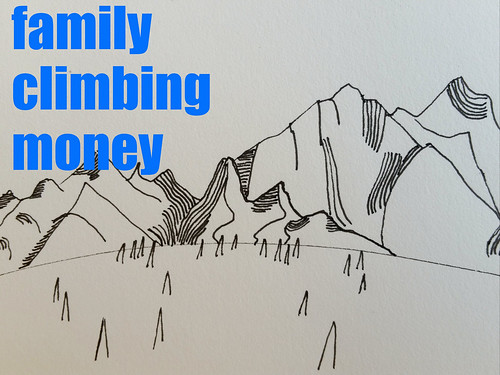 If you stop climbing, are you still a climber? Or did you used to climb?

If you start climbing again, you just proved that you’ve always been a climber. Right?

But what happens if you get into climbing, like really into climbing, and life offers to move you to a place without the mountains you love? Will you able be adequately continue to climb? That’s the question Travis is asking. Travis recently read my post When Climbing Does Not Matter and he wrote me in an email. He gave me permission to share this here:

I read your blog post entitled, “when climbing does not matter.” When I read that several years ago you lived in DC, I immediately thought of my own life situation.  I completely agree with you about the situations when, in fact, climbing does not matter. However, I am confronting some life choices at the moment that I feel are going to impede my ability to climb in the foreseeable future…
As of this moment I live near the Cascades, and have been fortunate enough to spend my weekends hiking and my work nights in the climbing gym. Over the last two years that I’ve lived here I’ve been slowly making inroads into the world of serious mountaineering, and am just now at a point where I feel comfortable tackling larger mountains.
I grew up in DC and the thought of ever moving back there is, to be frank, quite depressing. However, due to my career in intellectual property, the regression seems inevitable.
I have a final round interview for a position at a firm in Northern Virginia next week, and thus I am forced to grapple with the idea of not being able to climb anymore (should I actually get the job).
Since I would be remiss to not take this career opportunity, I wanted to ask you: how does one continue to be a serious climber when living on the east coast? And how do you find time with all of your responsibilities (career, family, etc.) to train? Finally, I am worried about de-acclimating to the altitude and failing climbs due to AMS if I’m living at sea level.
–Travis

I wished I could just tell Travis that he should stay in among the mountains. It’s an obvious choice to me. But life isn’t that simple.

When I was in Washington, DC for those 15 years, I know I was supposed to be there. I wanted to be involved in government and politics. I wanted to understand partisan differences. I wanted to know facts to leverage to bring clarity. So I worked for a Member of Congress for two of his terms, worked for a national financial trade association during the foreclosure crisis that became the Great Recession, before taking a cut in pay to join an advocacy team at a national nonprofit. And one day, just when Natalie’s and the kids’ needs weren’t being served there any longer, an opportunity came that we could move.

But the whole time I was in Washington, DC I wished I was other places. I called it Peaklessburg when I was upset about it. I dreamed about a policy job in Montpelier, Vermont. I even worked with a national insurance company about becoming an agent in Maine. DC was too sprawling, too crowded, and although nature was around me it was difficult to see between the stacks of concrete, steel, and glass. Mountains, particularly in the northeast that I craved, were too far and too costly to reach on a regular basis.

I have come to terms with the truth that I need several things to be happy, though two of them are somewhat conflicting and finding balance difficult: I need nature and wilderness in large doses, but I also need a job that I am called to do (meaning a job I find a lot of purpose.) Hopefully this isn’t your problem!

On the other hand, the Washington, DC can be manageable. There are frequently enjoyable climbing-related events with like-minded adventurers at both Earth Treks locations and both Sportrock Climbing Centers, the new flagship REI in the city, the Patagonia store in Georgetown, and National Geographic. I often took advantage of those.

Most importantly, if you haven’t seen it, I posted this back in 2016, when I was still in DC and expecting to stay there a long, long time: 10 Ways I Cope With the Big City. While I have some tangible advice, the key question was: What are you without climbing? For that matter, what are we if we take away our favorite activity or hobby? If we can answer that, I think we can make better decisions, even as climbers, hikers, adventurers, athletes, artists, and human beings.